Jason Borton is not your typical Run-to-the-Curb kid.

In fact he tells a story of how he once ran to, and through a window to see where the fire trucks were going in his neighborhood.

Growing up, he didn’t just visit the fire station by himself, his grandmother took him there, frequently.

What makes Jason special is that he’s written a book about what drew him to the volunteer fire service and all the great, and even some of the not-so-great experiences he had in his 15 years with the Sweeney Hose Co. in North Tonawanda, NY.

1st Lieutenant Jason Borton is in the center of this parade line-up with the old Engine 7 bringing up the rear.

Following is an excerpt from Jason’s book: “Memoirs of a Volunteer Firefighter“.

Be sure to check back here for the link to his special guest spot after “Firefighter Storytellers” — my new Internet radio talk show on Firefighter Netcast debuting tonight at 9pm.

“A high school senior’s attention is drawn out a classroom window to a fire engine racing down the street. He becomes a member of a volunteer fire company and comes to respect and fight fire.

Jason with the reserve engine on the day of his medical school graduation party at the Sweeney fire hall in 1999.

Along the way he also learns to deal with disgruntled bingo patrons and drunks in a beer tent. He trains hard and comes face to face with his own mortality at the funeral of a fallen firefighter.

As an EMT he helps his fellow citizens in their time of greatest need. Most of all, he learns about who he is as he confronts one of natures’ oldest enemies – fire.”

If you’re local to Western New York and would like a copy of Jason’s book, he’s offering a book signing session at Sweeney Hose on Sunday-June 20, 2010 (Father’s Day) from 1-4pm.

I received an advance copy and I highly recommend the book to anyone who enjoys behind-the-scene tales, especially in the fire service. It’s a great and easy read. You won’t want to put it down.

If you can’t make the book-signing, you can order it online at: http://www.buybooksontheweb.com/product.aspx?ISBN=0-7414-5989-2

Listen to the podcast, read the book, tell your story here.

Old Engine 7 when it was first delivered. Note the pump panel on the passenger side of this 1955 American LaFrance. 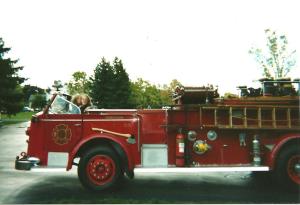 Old Engine 7 transported Jason and his groomsmen to the church on his wedding day in 2001. Those are his cousins goofing off in the cab.

Jason is geared up and riding in the jump seat of Engine 7 in this parade less than a month after joining Sweeney Hose Co.