Leave a comment Posted by Tiger Schmittendorf on July 4, 2011

Editor’s Note: My apologies to Chief Flanders for the delay in publishing his story. However, it’s only fitting that we publish this feature on our nation’s celebration of Independence Day as Norm Flanders is my favorite kind of two-hatter: a veteran of our US Armed Forces — and a veteran firefighter, and for that — we thank him for his service to his community and our country.

As a young boy, I always ran out to the street to see where the fire trucks were going and always waved as they drove by. I later befriended a firefighter in the city fire department and would stop by on his shift to say hi and visit. His friendliness and willingness to take a few minutes to talk to me impressed me greatly. Unfortunately we had to move out of the city and my weekly visits to the fire station ended.

I was about 15 years old when my real passion first got started…so to speak. I helped our local small town FD {not the one I am with now}, at a structure fire that rekindled.

After we moved we lived near a lake. I learned to love to fish and swim. I loved being outdoors every chance I could. Then one afternoon while about five of us friends were swimming, we heard sirens coming up the road. We hurriedly dressed, then went to check out where the fire truck was going and what the excitement was about.

The excitement was at a large farm house that burned the day before, from a lightning strike. It was again on fire. So we followed the fire truck up the road to the house. There was a small amount of smoke showing from the second floor window and the hole in the roof.

At first there were only three firefighters and us kids at the fire scene. Two firefighters were taking a portable pump to the lake to draft water. We stood around watching what was taking place.

The Fire Chief, a neighbor, asked me (I being the oldest), to grab a pack pump and follow him…{wrong in today’s world}…..so I did. I had NO GEAR, SCBA, or PPE. WRONG, WRONG, WRONG!!!!!! I was young and hey this man, “The Fire Chief” asked me to help. Oh yeah, what kid wouldn’t want to help. “I’ll help you”, I said. When this man asked me for help, my chest filled up with pride and full of excitement. Not knowing any better or the dangers that lay before me, we put that pack pump on my strong young back and off I went in to my first fire. It was heavier than I thought and I was dying by the time I reached the second floor.

There wasn’t much smoke or fire only a few beams and roof material burning. So I sprayed the water where I was told, kicked smoking ashes around wetting them down and I was hooked. I had wanted to be a firefighter since a much younger age but this did it. I helped reload the truck and before the Chief left, he patted me on the back and thanked me for my help. I was a very proud young man that day and have been since.

One of my shipmates, the late William “Bill” Capretti, was a fire fighter in Youngwood, Pennsylvania. During our time in the service we’d always discuss firefighting and how much he loved the fire service. He kept telling me that once I leave the service I should join my local fire department. While going home with him (and to spend the weekends with my now darling wife), I got to hang out at the fire house and with his firefighter brothers. We went to the surrounding fire stations to visit. Again, my passion and desire for being a fire fighter was rekindled.

I left the Navy in 1980 moving back to Vermont. With the desire and passion to be a volunteer firefighter I joined the Clarendon Fire Association in May 1980. My late buddy Bill was ecstatic over the fact I had joined my local fire department. But the desire and passion did not stop there. In May of 1981 I joined the Vermont Air National Guard (US Air Force), as a Fire Protection Specialist out of Burlington International Airport, Burlington, Vermont. Since Clarendon had the state airport in the community why not get additional training and serve my country as well.

I left the Air Guard in May 1988 as an Air Force Fire Protection Specialist Seven Level Fire Fighter, due to family and work commitments. Having three young sons growing up, who were very active in sports, scouting, etc., working second shift, and a few other things I took a leave of absence from the fire service in May of 1993. Working second shift limited my department training and interactive working skills with my fellow members. I felt that if I couldn’t give and participate 100% then I needed a break.

When I took over as the new Chief, I informed the membership that as with every new administrative change, comes new additional challenges and changes. I am looking forward to working with you to meet each challenge and change. I know this will be no easy task, and as with everything we must take small steps. I will continue work and improve on where Chief Brian Morgan left off. Together “WE” {you and I} can take the Clarendon Fire Association forward.

I will not ask of you to do any more than I would myself or anyone else. We are all here for the same reason “We’re volunteering because we want to”.  In order for all of us to work together we must continue to be a team. This works from the top down. All of us have a role to play no matter how big or small. We {that’s all of US……YOU AND ME}, must strive to make our jobs easier and successful.  I don’t ever want you to feel that your membership and role in the Clarendon Fire Association is not important. Each and every one of you is a very important asset to this organization.

My goal as Chief has been to further work with each of the surrounding fire departments on improving and enhancing inter-department training. By bringing many departments together we can share training ideas, share knowledge, interact with each others members and improve our team working skills. It’s easier to train to learn what will and will not work under controlled conditions rather than under a real incident scene.

I’m always looking for ways to further improve and enhance our operational skills, training and overall knowledge. This profession is a job that requires never ending and continuous training. When we fail to train and we fail to learn, we fail to serve ourselves, our fellow firefighters and our communities, effectively and readily to the best of our ability and in a professional manner.

I’m very proud and happy with the dedicated members that support me and make the Clarendon Fire Association a success. Without their outstanding help, support and dedication I couldn’t do my job. To my members I say, “Thank You for all you do and for giving of your time. It’s through your sacrifice, dedication, compassion, caring and professionalism that makes us successful!!” I’d like to thank you for caring enough to give of your time to unselfishly serve the community. It’s through your dedication and caring that allows us to function at the professional level in which we do.

Always remember, “You are the greatest investment this Fire Department has ever made“.

To the member’s families, I especially want to say, “Thank you for being so supportive of your husband/wife, boyfriend/girlfriend, son/daughter and significant other and allowing them to give of their time and for missing some special moments in your lives to be a valued member of the Clarendon Fire Association. Your outstanding support is greatly appreciated I will never be able to thank you enough.”

I am very proud of what I have done in the fire service throughout the years. I have two sons who have followed me in my desire to be a volunteer firefighter and serve our community. Both are currently Fire Fighter Level 1. One son is a Lieutenant and recently received Fire Fighter Level 2. It’s young people like my sons that are the future of this and every fire department. We must encourage them to reach for every level of training possible in order to be proficient, successful and professional.

I want to take our fire association to a much higher level, leave it in a much better state and set goals for the future and when I leave, I hope that I have impressed a few young men or women like that Chief did me many years ago.

About the young boy in the photos…….. 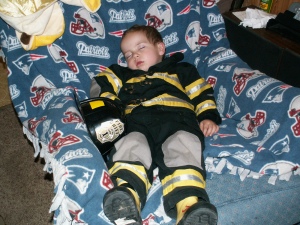 With the “big one” handled, time to rest before the bell rings again!

The young child in the photo is my four year old grandson Preston Flanders. The photo of him in my Chief’s helmet with that look on his face makes you wonder what he’s going to say next. He’s such a little character. He loves going to the firehouse. He always wants to check out the trucks.

While watching him he’s accompanied me on a few calls. He sits in his car seat pretending he’s talking on the radio like grandpa. He’s even told cars in front of us, “Get out of the way we got a fire call.” It’s funny to hear him repeat what I say on the radio. What’s funnier is when he adds, “We need mutual aid.”  He learned to say that while we were playing with his tractors and I say, “We got a tractor fire”. He grabs my portable and says, “We got a fire, my tractor, send trucks and mutual aid, this is the chief”, I just laugh and answer him we’re on our way.

He has a firefighter costume complete with boots, helmet, pants and coat. To complete his costume I gave him a broken pager for his gear. Giving him that pager made his day. He had a smile that warmed my heart and expressed great love. He grabbed me with a big hug and said, “Thanks Grandpa, I love you, now I can go to fire calls”.

He also loves to fish and be outdoors. I’m glad he’s taking an interest in the outdoors (just like grandpa, dad, mom & his uncles) and not wanting to sit in the house. He’s a very active young man who is always on the go.

He’s also had his photo in the local newspaper while in the driver’s seat checking out the new support truck. Who knows may be one day he too will be a firefighter.

Norman E. Flanders is the Fire Chief of the Clarendon VT Volunteer Fire Department. He has three sons and two grandsons. His first grandson: Preston E. Flanders is pictured above. Connect with him on FirefighterNation.com: http://my.firefighternation.com/profile/NormanEFlanders