Leave a comment Posted by Tiger Schmittendorf on May 5, 2017 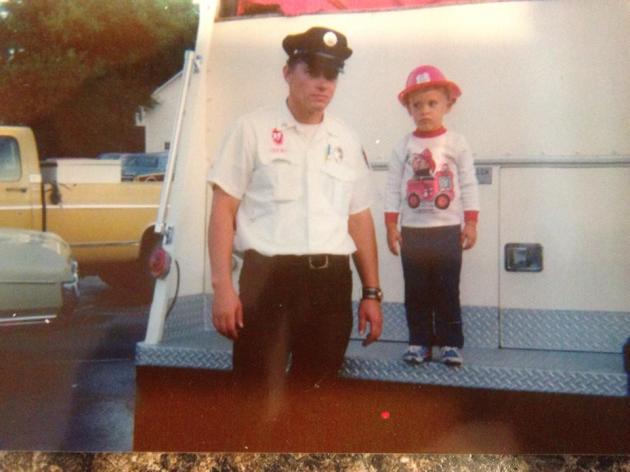 As you can see in this photo, being a firefighter was a lifelong dream of mine.

As a child, I went to the fire station with my dad every chance I got. Dad was a volunteer firefighter and EMT in a small Northeast Ohio for 33 years.

When I got old enough, say twelve or so, I would ride with my dad to the station on calls and man the radio. This pre-dates 911 telephone service and central dispatching. I would keep radio logs, answer phones and dispatch calls so the fire and EMS personnel could respond.

When I turned 16 I was finally old enough to join the junior firefighter program. In those days (1989-1991) we were allowed to participate in training and go on selective calls. 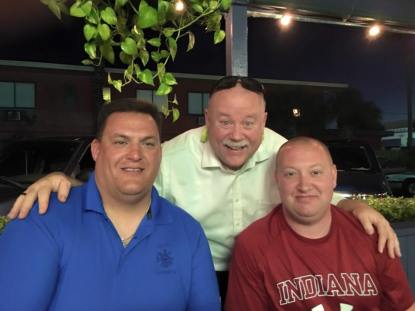 With my mentor Dr. Rich Gasaway (center) and friend Adam Farrar in Tampa-2015

I then took my 36-hour firefighter class as soon as I graduated high school and began attending the University of Akron attaining my Firefighter II certification while working towards a fire degree. It was there that I was  introduced to someone who would become one of my biggest mentors: Dr. Richard Gasaway, fire chief at the Springfield Township Fire Department at that time.

After attending Akron-U, I completed my EMT-B and continued to volunteer and work part time whenever possible. I was enrolled in paramedic school in 1996 and hired by the Bazetta Twp. Fire Dept. in 1997. In 2000, I was promoted to Lieutenant, then Captain in 2009.

Over my now 25-year career I have attained numerous certifications including fire & EMS instructor; fire inspector, and four degrees in: fire science, EMS, allied health management and science. I graduated from the Ohio Fire Executive program in 2014.

In May of that year, I had the distinct honor and privilege of being hired as fire chief of the Marion Twp. Fire Department in Marion, Ohio. It was my lifelong dream to become a fire chief and I am proud to say that my dad and many other people around me helped me attain that goal.

Another lifelong goal was to live and work in the greater Columbus, Ohio area. Last year, I was appointed as the Fire Chief of the Pleasant Township Fire Department in Franklin County, allowing me to fulfill both of these dreams.

My advice to those who, like me, still “Run to the Curb” is this: never let go of your dreams. They are attainable if you work hard and never stop dreaming.

Thank you for the opportunity to share my story.

ALL, Firefighter Storytellers, Run-to-the-Curb Kids, Stories
← Love Story Forged by Fire Why We Should All Want to be a Fireman →