I first became interested in the fire service when I was three or four years old. We had a very good family friend near our home town of Beaver Falls, PA, who was the Chief of the Chippewa Township (PA) Volunteer Fire Department. We visited them often and I also looked forward to going to the fire station with him.

He also gave me all of his old issues of “Fireman” magazine, then the official magazine of the NFPA (and probably the only real fire service journal in that era). I poured through these magazines and even traced pictures of fire apparatus in advertisements in them and made up my own fictitious fire department with them.

Although my Dad was never in the fire service, he was kind of a fire buff so I went to fires with him often. I lived in State College (PA) for several of my pre-school years and a volunteer with the Alpha Fire Company in State College lived across from our house. I always saw him rushing off to fire calls and wished I could go too. END_OF_DOCUMENT_TOKEN_TO_BE_REPLACED

Help Out this Run-to-the-Curb Kid

Leave a comment Posted by Tiger Schmittendorf on March 1, 2011 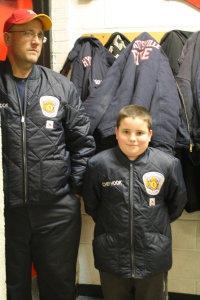 We’ll share the rest of the story about 11-year old Tommy Hook soon but all you need to know for now is that his Dad, Deputy Chief Jimmy Hook of the Hyattsville Volunteer Fire Department died last week after a brief illness at age 42.

The good folks at HVFD are doing the right thing by him and making sure that Tommy has the financial support to go on to be a great kid after the loss of his dad — and to follow in his father’s footsteps as a great adult and maybe even a firefighter some day too.

I only met Jimmy and Tommy once, and just a few weeks ago during my visit to Hyattsville, but as you can see from this photo I snapped by chance right before they left the firehouse — both of them left an impression on me.

Here’s the link to the education fund that’s been set up for Tommy Hook. I hope you’ll consider helping them take care of this great Run-to-the-Curb kid: http://www.hvfd.com/hvfd/content/view/304/2/

Epic Stories from the Beltway

Leave a comment Posted by Tiger Schmittendorf on February 22, 2011

One week after I bunked and rode with Hyattsville Volunteers, the “white cloud” (as they called me because they didn’t catch any work while I was there) was lifted and HVFD caught all the work they could eat this past weekend.

Here’s a few links to their wild fires and wild times to whet your appetite. I can’t wait to hear the back stories of these adventures.

You could even say that this is the story of my life: A week late and a dozen fires short!

From the Halls of Hyattsville 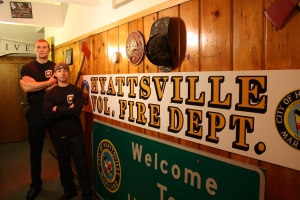 It may be a while before I have a chance to share all of the great stories and experiences I heard this weekend during my awesome bunk-in tour-of-duty with Hyattsville Volunteers but I didn’t want to delay in showing you the photos.

While we didn’t catch any real work, I still had a blast and gained a real education on and appreciation for bunk-in programs — especially theirs.

I also had the opportunity to tour College Park Volunteer Fire Department — a class act and great fire-dorm set-up — courtesy of Capt. Matt Machala who is rightly very proud of their program.

All of these young people are pretty impressive.

So until I can find the time to get to the real story, here are some photos — to paint a thousand words.

Leave a comment Posted by Tiger Schmittendorf on October 15, 2010

Nick Martin has served as a career/volunteer firefighter in Pennsylvania, Maryland, and Virginia; and currently serves in the District of Columbia.

He is a frequent presenter and trainer with www.tradtionstraining.com and is an author of articles dedicated to making us better and safer at what we do.

Join Nick and Tiger on Firefighter Storytellers on the FirefighterNetcast.com Radio Network at 9pm on Thursday-October 14, 2010.