Why We Should All Want to be a Fireman

Leave a comment Posted by Tiger Schmittendorf on June 1, 2017

I’ve known local WYRK Radio Personality Clay Moden for several years and in different circles, but even I was caught by surprise when he shared this ‘true confession’ about his life long dream to be a firefighter.

Although he hasn’t joined our ranks [yet], his confession does explain a lot about why he’s always been a very vocal supporter of the volunteer fire service (and everything else that is right about America).

I’m proud to know him and call him a friend – even if he only helps us from the sidelines. I hope his story inspires others to step up and join our service.

By at least my definition, Clay Moden is definitely a RuntotheCurb.com kid!

And if he ever wants to fulfill his dream, I know a guy…

Leave a comment Posted by Tiger Schmittendorf on September 2, 2014

An old friend (and one of the original TSL subscribers) Captain Al Hagan has retired from the FDNY. Al was also President of the Uniformed Fire Officers Association IAFF Local 854.

www.ufoa.orgMany of you will also know Al as a popular FDIC and Firehouse Expo Instructor-among many other classes and seminars-you are definitely fortunate to have spent time with Al .

He is absolutely one of a kind.

Al retires almost 41 years working as a Firefighter (E-36), Lieutenant (L-44) and Captain (L-43). He retired Saturday morning, August 30th, effective at 0900….Labor Day weekend. He is also retiring as President of the Uniformed Fire Officers Association. In Al’s words: “Collectively, it was a wonderful experience that I wouldn’t trade for the world!  I’d like to thank all of you that were kind enough to help.”

Take a moment to read and enjoy the below story from The Chief Leader.

Even if you haven’t met Al-take a look at the below for a great lesson in leadership-at the firehouse-and at the political level:

Alexander Hagan last week had already removed all of his personal photos from his office: the many snaps of his family, but also the one that captured himself in a very different time-in gym shorts as a young man who competed in five marathons when he wasn’t fighting fires.

As he got ready to retire on Aug. 30, the Uniformed Fire Officers Association President and Fire Captain, now 64, looked back fondly on a time when on nice days, he sometimes ran the 13 miles to work.

Those days have slipped past, ended by a bum knee and the chronic bronchitis and cough that have plagued him for more than a decade. The lung problems recently sparked a diagnosis of reactive airway disease, a condition that can result from exposure to noxious substances and that has been called “occupational asthma.” Mr. Hagan said he might have gotten it even if he hadn’t spent months cleaning up at the World Trade Center site after Sept. 11. END_OF_DOCUMENT_TOKEN_TO_BE_REPLACED

Death, Taxes and the Brotherhood

Leave a comment Posted by Tiger Schmittendorf on December 20, 2013 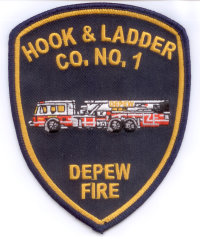 I enjoyed meeting you this morning at Depew’s day drill. I belong to the Depew Fire Department’s Hook & Ladder Co. 1. I am proudly a “Hook” with a Maltese Cross tattoo to prove it too. (Once a Hook, Always a Hook!)

I want to tell you this one story:

My proudest moment in the department came nearly two years ago, February 2011, at my Mom’s wake.

My Mom was a fireman’s wife. My Dad, Vince, died as a life member of the Winchester Volunteer Fire Co. many years ago. Mom was just weeks shy of her 89th birthday. We held the wake at Hoy’s Funeral Home in West Seneca. END_OF_DOCUMENT_TOKEN_TO_BE_REPLACED

Leave a comment Posted by Tiger Schmittendorf on October 15, 2013

This will be a shorter version of a much more detailed post to come but for now, I have to share some of the story behind this photo. 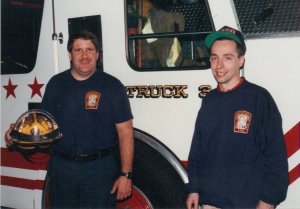 JIM GUY: Just found this photo of Tiger (when he was just a cub) and Iron Mike- DCFD

A good friend and mentor of mine, Jim Guy just posted this photo of me that dates back almost 20 years.

I’ll never forget my first trip to Washington, DC and visiting the “Midnight Express” — home to 16 Engine, 3 Truck and the 6th Battalion Chief. Despite being my first trip, accompanied by Jim, Dave Sherman and Ric Dimpfl, they made me drive on the Beltway around DC — just perfect.
We were traveling as the management team of The Fire Fighter Newspaper, a publication just three years in existence at the time, to the annual National Fire & Emergency Services Congressional Caucus dinner hosted by the Congressional Fire Services Institute (CFSI.org) at the famous Washington Hilton. As the dinner cost something like $250 a plate, we were honored to be the guests of Volunteer Firemens Insurance Services (VFIS.com). (Why the Washington Hilton is famous is fodder for the longer version of this story!) END_OF_DOCUMENT_TOKEN_TO_BE_REPLACED
ALL, Stories, Uncategorized brotherhood, DCFD, Fire Fighter Newspaper, run to the curb, story, tiger schmittendorf

The most important stories of all

Last year, I wasn’t so lucky. I was tasked with interviewing and capturing the stories of the survivors about their firefighters.

Our goal was to capture 60-90 seconds of video for sharing via the Foundation’s various social media channels. Invariably, even if I talked to a particular survivor for 10 to 15 minutes, it wasn’t until the end or when I asked if they had anything else they’d like to share, if they had anything else they wanted people to know about their loved one — that the real gemstones of insight came out. END_OF_DOCUMENT_TOKEN_TO_BE_REPLACED

Three Decades and One New Sidewalk.

I just came home from responding to my third second-alarm fire of the week in my role as Deputy Fire Coordinator in the Erie County Department of Emergency Services and have a narrow window of opportunity to write this post. I’ve got about two hours to shower, shave, eat and then report to a law enforcement detail I’m assigned to until 3am. So here goes:

Earlier today I responded to an EMS call for a person with chest pains. Being assigned as Fire/Rescue only, I don’t typically respond to a ton of house calls but I try to help out at my fair share. Today, I was glad I did. 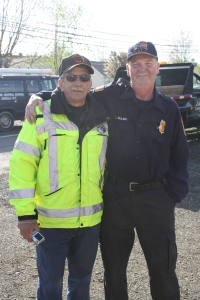 Two of my all-time favorites at the fire station: Angelo Rizzuto and Denny Allen+ at a drill in 2010.

Upon returning to the station I went around to the administrative side of our building to check on the progress of our large parking lot paving project (large, as in square feet and dollars!). The contractors were just finishing the last section of new sidewalk around the perimeter of our assembly hall. Standing there with our President Geordie Sinclair and 53-year active member Angelo Rizzuto, I asked Geordie if I could write my initials in the corner of the concrete, just as I had done when the assembly hall and original sidewalk were built, in 1971.

I remember that event as if it were yesterday, recalling how the contractors paid a few of us neighborhood kids 25 or 50 cents a day to help them pick up materials and debris. I was 8-years old.

I thought that initialing the new sidewalk would only be appropriate, seeing as I’m still here, so many years later. It was then that Geordie reminded me that I have an important anniversary coming up this week. END_OF_DOCUMENT_TOKEN_TO_BE_REPLACED

Running to the Curb — and then the Engine!

Leave a comment Posted by Tiger Schmittendorf on November 14, 2011

I stumbled upon these videos while searching for another fire service related piece and thought they were cute. The first shows two twin boys running to the engine and gearing up for the big one while the second video shows an older boy waiting for his turn to really ride the big rig.

While neither video is certainly “professional grade,” they are both good reminders of what made each of us come to the fire service as Run-to-the-Curb kids and hopefully serve to motivate us to keep doing what we love to do.

I’m sure there are plenty more videos just like this out there on the web. Do you have a photo or video of your future firefighter gearing up to be a Run-to-the-Curb kid? We’d love to share it here.

Tremendous loss of a talented storyteller

Today, as we mourn the loss of fire service and journalistic leader Hal Bruno, it’s important to remember what an important part he was of our fire service, our communities and our world.

His depiction of the 1958 Our Lady of the Angels School fire that claimed 95 innocent lives is a classic example of his impact on our industry and the news world.

Rest in peace fine sir. You will be sorely missed but your contributions live on.

UPDATED: 11/7/11
Please join me for a special Veterans Day tribute show on FirefighterStorytellers.com on Wednesday-November 9, 2011 at 9pm EST.

We’ll be joined by a few very special guests who are veterans of both the armed forces and the fire service — my favorite kind of two-hatter — including Vince Pupo Jr., a Marine, Fire Investigator and retired Fire Chief and Sheriffs Department Detective.

In addition to being a well-known fire service “character” — Vince has written and shared his experiences of his military service during the Vietnam War and now writes short stories and poems related to military life and post traumatic stress disorder (PTSD) affecting veterans.

The show will be dedicated to Matt Kreiger, a fine young man from my volunteer fire company (Evans Center) who is recovering from being shot in the head while serving in Afghanistan earlier this year. We will also recognize the efforts of WNYHeroes.org — a local organization dedicated to elevating the status of our veterans from desperate back to decorated.

Please help us spread the news of this very special show by downloading, printing and distributing the show flyer and/or sharing a link on your Facebook page or other social network. We hope that you can join us.

These two Run-to-the-Curb kids are obviously destined to follow in their father’s footsteps as the children of Lt. John Shafer from Greencastle Indiana. John is the editor of the popular blog “Green Maltese” and is a rising star on the subject of building construction and firefighter safety. Six year old Jade refers to herself as Daddy’s “Little Fire Girl.”