I thought this story was important enough to give it its own permanent page:

In my last blog titled “Dig In.” I talked about the importance of story telling in the fire service and how it serves as a means of sharing experiences, traditions and values from generation to generation. In this article I try to tell a story, and in that story, I hope you can find a lesson to share for generations to come.

Almost every firefighter I meet speaks of how they always knew, from the time they were a very young boy or girl – that they wanted to be a firefighter.

I was one of those kids. I call them the “run to the curb” kind of kids.

The Evans Center Fire Hall (as we called it) was just down Bennett Road and around the corner on Route 5, maybe a few hundred yards away from my house, as the crow flies. Closer than that was the rear entrance to the sixteen acres of fire company property, directly across the street from our driveway.

Growing up so close to the firehall, it was an obvious choice as a place to hang out with my friends. We played baseball on the ball fields the fire company leased to the Little League for a dollar a year. We helped out at and patronized the carnivals and other fund-raising events. When the fire company added on a large banquet hall in 1971, we helped the contractors move supplies and materials. My initials are carved in the concrete sidewalk they poured. I was eight.

And of course, we ran to the curb whenever the fire siren went off. It was loud and it seemed to cycle forever. With the windows open on a warm summer night you could hear a siren from a fire station ten miles away. It would wake me up out of a dead sleep, trying to figure out the direction and thus the firehouse it was coming from.

Me with Past Chiefs Denny Allen, Pat Davis and John Latimore

Whenever we heard that siren wail, we would run out and look to see if the fire trucks were coming down our road or headed in another direction. As we got older and were allowed to venture further, we ran to the corner to watch them racing out of the station, lights flashing and sirens whining. The firefighters, in their rubber coats and boots and metal helmets. were strapped to the tailboard of the fire engine by a coarse rope belt that had a sharp hook on the end that would gut you like a fish if it ever caught you. I still have one of those.

Oh, how we wanted to be those guys.

When we weren’t at the fire hall, we were pretending to be at the firehall. We rigged our bikes with over-sized reflectors to act as “flashing” lights, and made walkie-talkies out of pieces of wood with a sixteen-penny nail in the top to serve as the antenna. That same nail was also used to carve the hatch-work of where the speaker would be on the radio. Our mothers’ flower gardens never got so much watering as when we stretched the big “green line” to douse the fictional flames on the side of the house.

I was blessed to grow up in a neighborhood with a lot of kids, twenty-one to be exact, across just three households.

We had eight. My best friend John’s family had nine children – they were Irish Catholic. And my other best friend Doug’s family had four kids. They were just Catholic. We were an anomaly in the neighborhood as we were neither Irish nor Catholic, but we held our own in the fill-all-the-seats-at-the-kitchen-table department. (If you’re interested, you can read more about my neighborhood in my blog titled “The Lost Act of Popping In.”)

The rides with the chief became more frequent as we got older. We observed and learned a lot. We were accepted by the firemen as firehouse brats, despite the fact that no one else in our families was associated with the fire company.

One summer night, I remember waking up to the siren sounding, getting dressed and running down the street, John and Doug jumping in line on the way. What made this time different was that when we reached the corner, we weren’t met by the fire chief but by the local police, as the fire was in the historic old schoolhouse on the corner. Fortunately, the chief arrived shortly and quickly vouched for the ad hoc ride-along program we’d been practicing for a while now.

Our un-official arrangement continued for quite a while until the fire company caught on to the fact that we were helping out way too much at fire scenes. After what was I’m sure a heated debate, the fire company decided to take advantage of our youthful exuberance and formed a junior fire company to protect us, them and our activities. On September 1, 1980 I was inducted as Evans Center’s first ever Junior Firefighter at age 17. Today, I celebrate my twenty-ninth year with the fire department.

Of course, growing up across the street from the firehouse certainly gave me a distinct advantage in figuring out my passion for what I wanted to do with my life. However, at the time, it just wasn’t clear as to the route I would take to get there. Then I discovered later that some of us are fortunate enough to get a “heads up” on what that path might look like.

Amongst many other treasures, in that box were two cards and a hand-made book that may have forecasted where I would be today. The first card was to my parents congratulating them when I was born. The card was from the Evans Center Fire Company Ladies Auxiliary. The second was a first birthday card from my grandmother that folded out to reveal a fire engine. In her handwriting at the bottom of the card is: “Someday maybe you’ll get the real thing.”

The book report was titled “The Fire that Ruined Chicago.” I wrote and illustrated it when I was nine years old.

Call it fate. Call it fortune. Call it what you want.

Me and my good friend Clarence Center Chief Dave Case

Since first running to the curb, I rose to the rank of Chief of Training and have held a dozen other offices in our fire department. With eighteen years experience under my belt, I was blessed to be able to make my career in the fire service ten years ago, now serving 97 fire departments and more than 5,000 firefighters. Trust me, there have been plenty of other stories along the way, some of which I might share with you in future articles. I kept a log of every single call I went on in my rookie year. That’s a story in itself.

John went on to be chief of the department and our town fire marshal. Doug has been a paramedic for more than 20 years. I don’t think we turned out half bad. The best part is that my collection of friends has multiplied many times over the years.

The bottom line is this: What’s your story? Were you a kid who ran to the curb when you heard a siren?

Will you be ready, willing and able when an opportunity comes knocking?

So where’s the lesson in all of these childhood memories and challenging questions?

Our challenge in recruiting and retaining people in the fire service is this: 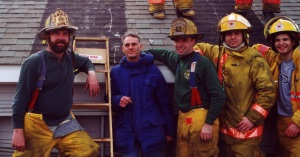 Chief John Latimore and Davey Kohler with me and our Explorers. Davey has been a fixture around our firehouse since 1968.

I often say that you can tell the difference between those who have the fire service in their blood, and those who don’t. It’s an addiction. Stand in a room full of real firefighters and you’ll see a hundred noses pressed against the window waiting for the apparatus to catch up to the Doppler effect of the siren.

And like anything else that can get in your blood, it can hurt you if you let it. This reality reminds us to prioritize our first family first, and to balance our love for the fire service with our love for those who love us; and the other important things in our life.

For those who were run-to-the-curb type kids, we need to remind them what it was that attracted them to the fire service in the first place. We need to re-instill that imagination, FUN, curiosity; that excitement that takes them back to their childhood and then brings them to the apparatus floor.

If they weren’t one of those kids, you’ve got your work cut out for you, but like everything else in the fire service, we can adapt and overcome. Sometimes we need to start by reminding ourselves what brought us here and use that as a jumping-off point to instill that passion, motivating others to join our ranks or re-light their fire for the fire service.

Fortunate enough to be a part of this special bond we all contribute to, our ability to share information and experiences through effective story telling will be a critical skill set in sustaining the future of the fire service. It’s a form of mentoring, teaching and of leading.

Our contagiousness, our ability to spread our fever for the fire service, our “love for the job” as Chief Rick Lasky calls it; is critical to the survival of the fire service as we know it, now.

Invigorate that kid-like level of enthusiasm in others and you’ve got a new firefighter fulfilling their lifelong dream – or an experienced firefighter fanning new flames of eagerness for what we do.

Either way you’ve made yourself a fortune by investing your passion with a purpose in those we serve, and serve with.

For a comprehensive offering of R&R resources, visit my blog at http://www.tigerschmittendorf.com. Click or call if you’re looking for ideas or want to volunteer your own. I’d love to hear your stories.

Let me know how I can help.

Tiger Schmittendorf is chairman of FASNY’s Recruitment and Retention Committee and serves the County of Erie Department of Emergency Services (Buffalo NY) as Deputy Fire Coordinator. He created a recruitment effort that doubled his own fire department’s membership and helped net 525+ new volunteers countywide. A frequent presenter on the subjects of leadership, incident management, safety, recruitment and retention, he is a Nationally Certified Fire Instructor and has been a firefighter since 1980. Visit his blog at www.tigerschmittendorf.com.

Download a printable copy of this blog article. ©2009tigerschmittendorf.com